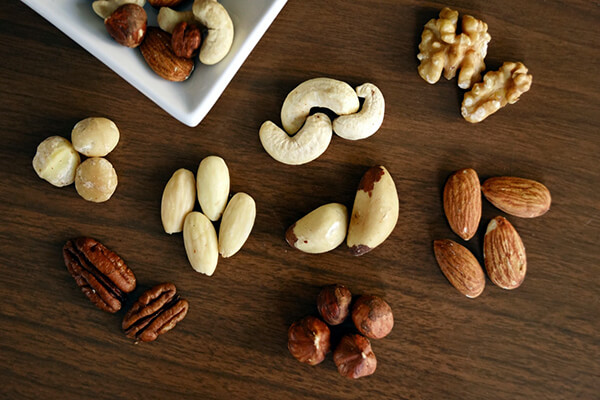 Nuts grow around the world. In similar climates with some countries producing a majority of a specific global crop. All nuts from each growing area are harvested one time a year. Because climates are different depending on the country, when a specific nut is harvested in each country varies. At anuts.com (and Argires Snacks), most of our nuts are grown in the United States. Only cashews and macadamias come from other countries.

Here is the rundown:

Almonds are mostly grown in the United States (primarily in California). A few are grown in Spain, Iran, and Morocco.

Brazil Nuts are native to South America and grow wild in the Amazon rainforest. Brazil, Venezuela, Colombia, Peru, and Bolivia are all countries that export them.

Cashews are grown in India, Africa, Vietnam, and Brazil.

Filberts (also known as hazelnuts) are mostly grown in Turkey and Italy. These two countries account for 80% of the total global crop. The United States (primarily in Oregon) and China produce small annual crops.

Peanuts two largest producing countries are China and India total about 55% of the global crop. The United States produces quite a bit with peanuts coming from the Southeast (Georgia, the Carolinas, Florida) as well as from Texas, Oklahoma, and New Mexico. Argentina and Vietnam also grow them.

Pecans grown in the United States account for over 40% of the global crop. Georgia, Mississippi, Arkansas, Texas, and Arizona are the primary states where they are grown. Mexico produces quite a few. Other countries include Peru, Brazil, Israel, South Africa and Australia.

Pistachios largest producing country is Iran with the United States second. Together they account for over 70% of the global crop. Turkey, China and Syria also produce them.

We believe that fast & fresh enhances taste. So we work our hardest with all of our suppliers to make sure the freshest, healthiest and highest quality batches are picked for you to enjoy, your way. That's why Anuts.com is the best place to buy nuts online.